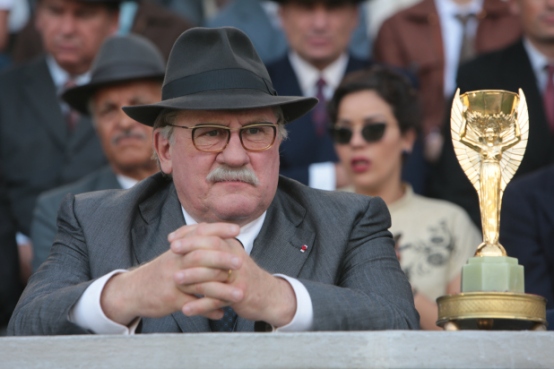 For this book report, I’ve decided to adapt a third grade Book Report Form I found online. Let’s get to it.

Setting – Where does the story take place? Somewhere between Dante’s third and fourth circles of hell. That is, squarely between gluttony and greed. Which is to say, United Passions is all about the formation, foundation and growth of the monstrous federation that oversees global soccer, FIFA. Fucking FIFA, man.

Main Characters – Give a brief description of each character.

There are three main characters. First, there is Jules Rimet (Gerard Depardieu). This man, responsible for the World Cup, was apparently a paragon of virtue and ahead-of-its time insight. He was anti-racism, fascism and elitism, because he simply had a dream. I mean, sure, he also allowed the very first World Cup location to be bought while publicly selling it as a “vote,” and he was part of the establishment that built FIFA on the back of corruption and extortion but, you know, they totally outgrew that.

The film then turns its focus on Joao Havelange (Sam Neill). I can’t really tell you much about Havelange except that he was a FIFA president between Rimet and the notorious Sepp Blatter. Havelange was corrupt. Because FIFA. Beyond that, it seems like the film is setting him up as the “bad guy” who almost ran FIFA into bankruptcy but, honestly, the movie is such a hot mess that it’s all rather unclear. But it doesn’t matter.

Because enter SEPP BLATTER (Tim Roth). In the real world, we know he’s under ciriminal investigation for being a corrupt shit pile. But according to the film, he was strongly ethical and anti-corruption. He’s a god damned hero.

Summary – What happened in the movie? I suspect if you asked writer/director Auburtin he would tell you the fair summary of this movie is that it shows the history of FIFA’s incredible rise to being an important facilitator of social good in the world. A character literally says “the world cups we organize do more for world peace than any UN resolution.”

Of course, the reality is that garbage happened in this movie. Approximately one hundred and nine minutes of garbage. The film lacks anything approaching even-handedness, subtlety or nuance. But at least it’s full of bad acting, an awful score, boring pacing, several montages where literally nothing happens, some of the worst “sports movie action” you’ll ever see and these intercut scenes of poor village kids playing soccer because FIFA brings hope to the Poors. This movie is art.

Moral of the Story – What did you learn from watching the movie? I learned exactly why this was one of the worst box office performances of all time, making less than $1,000 in its US weekend premiere.

Conclusion – How did the story end? Oh holy shit, get this. It could’ve ended somewhere near the present day, showing Sepp’s ouster, the weight of his mass corruption finally caving in on top of him. But instead, and I am not making this up. Seriously now. It ends with an implication that FIFA and Sepp are responsible for ending South African apartheid.

What did you think of the story? I mean, I think I’ve been pretty clear about that, no? Fuck you book report form.

This movie was… Too hard too watch. Seriously, I took two naps and almost three-and-a-half hours to get through this crap fest. Nobody should ever watch this movie. Ever. Watch the series of six wonderful John Oliver videos below, instead…

This book report comes to you because I suck at trivia. I do an online daily trivia thing and my friend and I were going up against each other. Perfect opportunity for a book report bet. Questions were asked, questions were answered. We each got four questions right but there’s a defensive scoring element, and he played better defense. The thing is, I shoulda had a fifth question right. But I’m a fucking idiot. So I blame this bet loss on accounts receivable and my own god damned idiocy.

2 thoughts on “United Passions Is a Very Faithful Telling of FIFA’s Origin, Insofar As It Is as Much a Festering Pile of Shit as the Federation Itself”